What does it do?

This shot shows two members of the “Inglorious Basterds” from the perspective of a defeated Nazi officer lying on the ground, which is visualized by the low angle shot. Not only illustrates this the corresponding perspective the officer would see from his position but also emphasizes the power dynamics of the scene as Brad Pitt is about to take revenge. Moreover the wide angle lens replicates the field of view of the human eye, increasing realism while exaggerating movement in space. 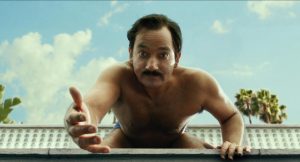 Shows the vision of PI looking up to his father from under water.